pSHL8 is not the one I have

In my pursuit of an indigo plasmid, I had two options: straight up synthesis, or getting the original plasmid cloned from the rhodococcus gene.  Back when I started this project, it would have cost about $600 to get the gene synthesized and stitched together, which would leave very little room for improvement.  Fortunately, Dr. Stephen Hart was kind enough to send me the plasmids from his research from 20 years ago.

Unfortunately, the only plasmid that was still intact was labeled pSLH1.  pSLH1 is described the paper “Construction of an insertional-inactivation cloning vector for Escherichia coli using a Rhodococcus gene for indigo production” as “The prototype insertional-inactivation cloning vector pSLH1… level of production appeared to be lower than that of other pigment-producing strains…cells produced only slight amounts of pigment even after several days incubation at room temperature.”  According to my observations, this is accurate- it takes a while for the transformed bacteria to produce indigo.  This seems to be because between the the indigo production gene and the promoter (an in-frame lacZ’a fragment upstream of the gene), there is a stop codon and two rare codons which theoretically prevent the gene from being expressed. 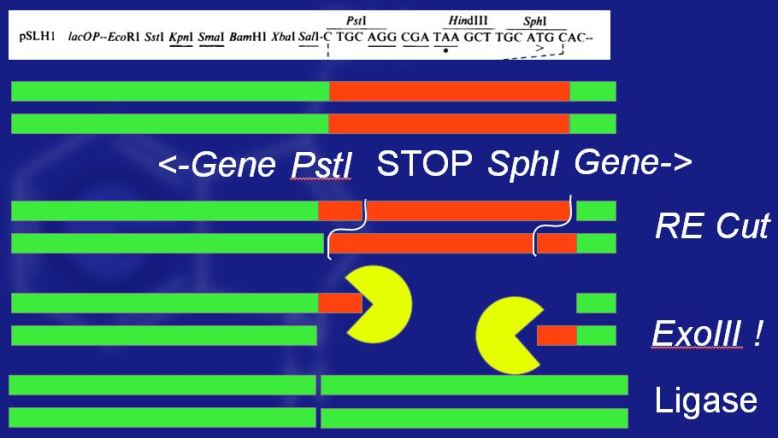 Hart and Woods went ahead and deleted the deleterious fragment of the gene by cutting out the undesirable DNA, chewing the ends of the DNA back with exonuclease III, and then blunt-end ligating the ends together.  Amazingly, this deletion keeps everything in-frame, and produces more indigo than without the deletion.  The process is shown in the image above.  First, the gene is cut, then the exoIII blunts the ends, and finally they are re-ligated.

In theory, this is great, and it totally works.  In practice, something was mislabeled or possibly only a mutated version made it to me 20 years later, because the sequence I got was not the sequence from the paper.  It was pretty close, but definitely different.  Lets compare:

Bolded letters show the “wrong” codons for the cut recognition site (CTGCAG) for PstI.  My hypothesis is that the new read is correct, and that the old read was flawed in one way or another.  This is because the new read was duplicated exactly the same across 8 independent samples, and the old read was probably done once.  The new reads were done on a modern sequencing machine, while the old read was done from radioactive sanger sequencing, which can be hard to interpret, leading to easily transposed letters in the sequence.

The authors may have gotten lucky with the enzyme as well.  I was using a recombinant “HF” enzyme, which stands for high fidelity.  This means that it has lower star/non-specific activity, reducing the chance it will make an improper cut.  To give you an idea of how much more specific the HF version is, I took this snippet from the NEB website:

So the short version is that the HF version is something like 20-500 times more specific.  20 years ago, the PstI may have been even less specific, and allowed for cuts like the one that was made.  Or, somewhere along the line, a lossy polymerase copied the DNA wrong and my copy is mutated.

Either way, what actually seemed to happen was that the double-digest with PstI and SphI turned out to be a single-digest.  If you look at the actual sequence:

then blunted to this:

and then ligated to this

Instead of increasing yield, this introduces a frame-shift mutation, which makes the gene totally useless since it is being translated out of frame.  Transforming the DNA yielded ampicilin resistant colonies with no indigo production ability.

So that was a big waste of material.  However, there is some good news!  The price of DNA synthesis has dropped, and the length of DNA that can be purchased has increased!  In these new and exciting times, the cost of synthesizing the gene is only about $200!  So I think my next steps are to codon-optimize the gene for e. coli, add restriction sites, then to add a promoter to it and stick the whole thing into p2kb to share with people.