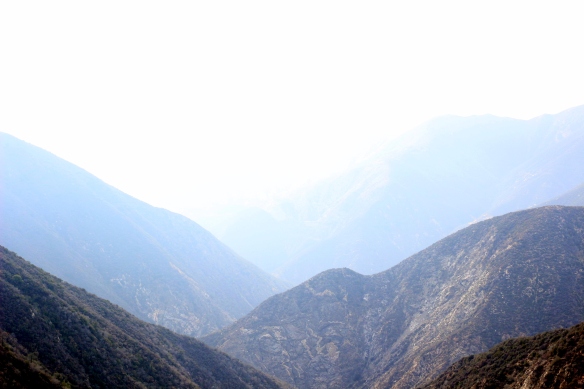 Swan rock and surrounding mountains from the ascent to the mine

This hike is not for people who are claustrophobic, acrophobic, or who are not in tip-top shape, but I went anyways.  That being said, it is a long, hazardous and very rewarding adventure.

After being thwarted by Stanley Miller on two separate occasions (for various reasons), my brother and I decided to test our luck on the closer and seemingly easier to reach the 100 year old site (just last year year!) of the Allison mine.  This mine made the late Hugh Blanchards list of “Local Gold Mines We Will Never See!”, which only made it more appealing.  Hugh Blanchard lists it as a 14 mile hike with 3000 ft of elevation gain, but we clocked in at 10 miles with ~2400 ft of elevation gain. 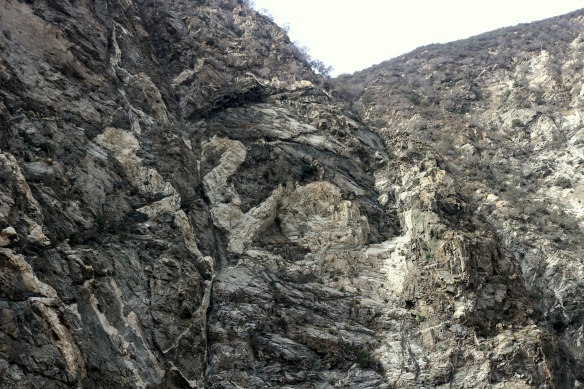 The most direct route starts at the Henniger flats parking lot.  After departing from the trailhead, you head upstream making a few river crossings, which should all be pretty easy.  All the crossings have some kind of feature (log, rocks) to assist in crossing.  At no point should you have to step in the water!  The same goes if you are heading to the bridge to nowhere.  At some point, you should see swan rock (pictured above) as the river makes a left turn (relative to heading upriver, a right turn if you are headed down).  It is my belief that the part that looks like a “swan” is that white part in the middle of the rock.  It is also important to mention the scale and location- it is a massive, nearly vertical cliff face, not a huge boulder.

A fraction of a mile upriver is the entrance to Allison Gulch, and where you start to take the trail off the (literally) beaten path of the east fork.  Its most defining feature is that there is some kind of concrete drainage ditch there.  The gulch itself is actually quite pleasant during the day.  The white rocks are set off by deep piles of red leaves and the steep sides and foliage provide good sun protection.  We brought a water filter with us so that we could stock up on water when it was available.  This was a good idea, because we didn’t have to carry all our water with us all the time.  Fortunately for us, we found plenty of water in the gulch- at the bottom, at the point where we ascended, and finally at the mine, so we never had to worry about running out of water, although we were conservative on the way up. 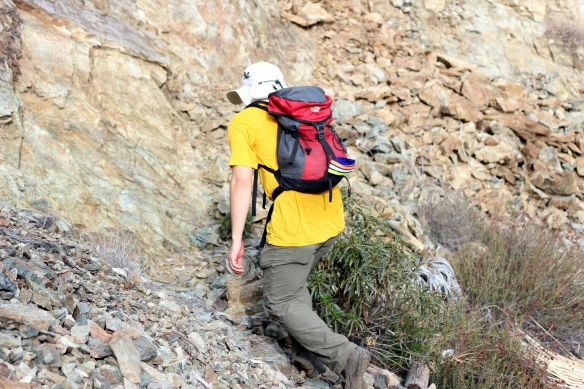 #2, my brother, on the so-called “path” to Allison mine

A mile or so upstream of the entrance to the gulch there are conspicuous markers that lead to the trailhead, which include but are not limited to a pair of boots on some small trees, a rusting shovelhead, and a jacket that is stiff from exposure.  This marks the beginning of about 2000′ of elevation gain over about .4 miles (walked distance), on a sun-drenched and steep trail, mostly made of dirt but including occasional piles of scree.  If it had been hot, I think we would have turned back!  As it was, we took frequent breaks and ate lots of snacks.

At the apex of our ascent, the path took a sharp turn to the right and followed a contour line back towards the gulch.  The reason the path was created becomes apparent when you realize that the canyon, for all intents and purposes, ends in a sheer drop not far from the mine, making it impossible (or at least, improbable) to navigate to the mine via the floor of the gulch.  As we got closer to the mine, we saw one of the few structures left standing- an ore hopper.

At the site of the mine we discovered three entrances which we explored (two of which connected).  One was practically paved with cans at the entrance, and featured many branches, one of which ended in a cave in.  The other digging featured two entrances and many vertical shafts which we did not have the time, people, or equipment to explore, although we did photograph them.  At the upper entrance to this digging we found what appear to be even more tunnels, although we were running out of time to explore them. 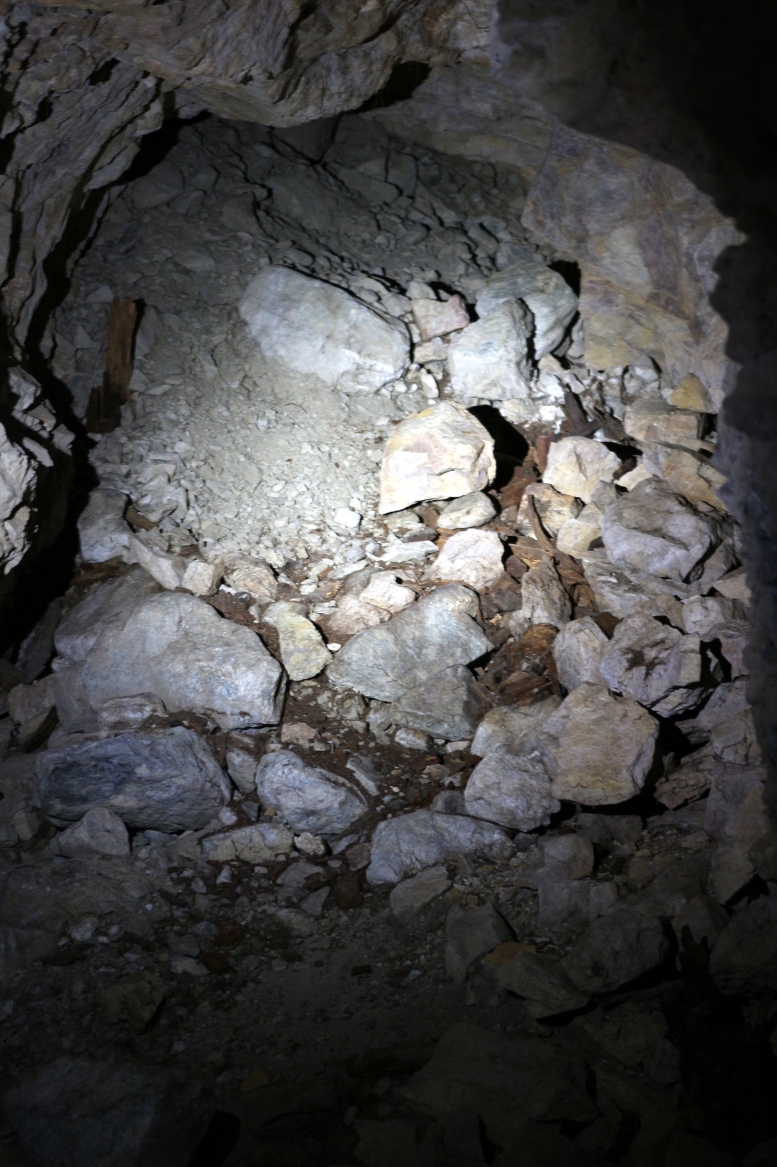 We also noticed the remains of a camp site up around the mine.  The equiptment looked disturbingly modern, but it had clearly been there for some time as the tent had been blown around and the sleeping bags had been sun-bleached- we wondered where the people were, and we hoped the answer was not that they were in the collapsed section of tunnel.  In another part of the enormous mine site, we found a cache of what appears to be a sleeping bag or pad and a tarp, as well as some 5 gallon buckets.  These were in a well-protected area, so they may be the same vintage as the tent, but it is hard to tell because they are not weathered. 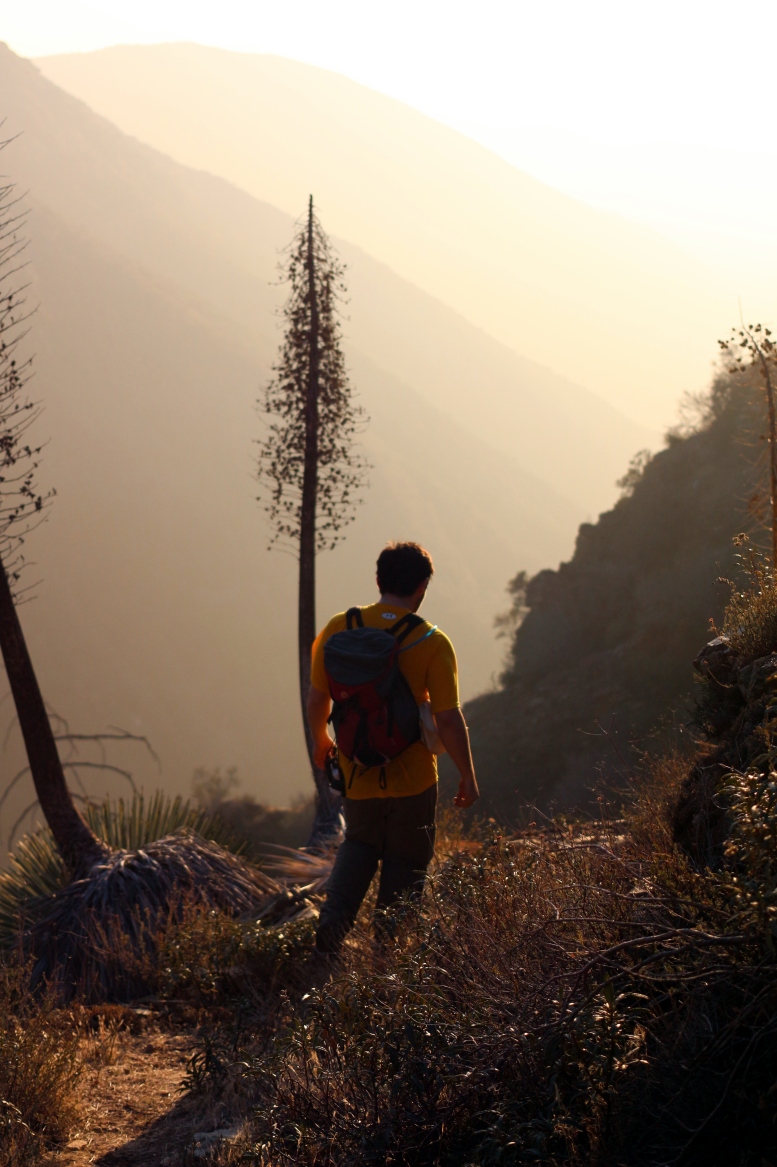 By the time we had filtered more water and made our departure from the mine site, we knew we wouldn’t make it back without some night hiking.  As the last rays of the sun diffused through the hazy canyon, coating everything in a golden glow, we were working as fast as possible to get off the mountain.  At one point, we got off the trail, which was a costly mistake- it is considerably more difficult to get down in one piece where there is not a trail, and there are many small paths that look like trails.

This is basically the last we saw of the sun.  While it was an amazing view, it meant that by the time we hit the floor of the narrow and overgrown gulch, it was very dark.  Our headlamps came out again and we made our way down the gulch, this time picking up on an actual trail and saving lots of time.  By the time we made it back to the trail we were sweaty and sore from pounding our joints on the steep decent.  By the light of our headlamps, we started our hasty retreat to the parking lot.