So, you want to isolate that plastic degrading, or bioluminescent, or plasmid-bearing microbe from the rest of a mixed sample.  Or maybe you want to grow up a colony from a single bacteria for a clean PCR sample, or to inoculate a liquid culture.  To do this you will need to streak a plate!  There are many techniques for this, but there are really two key ideas:

My technique for this is to heat my loop up to orange-hot, then cool it in the agar of the sample I am taking the colony from, being careful not to touch any of the colonies on the plate.  Once quenched (So I don’t heat-kill the bacteria),  I rub it on the target colony or area on the sample plate.  Then I close the sample plate and open the target plate.  I like to do 3 streaks.  The first one is to spread out the bacteria I picked up on the top 1/3 of the plate.  Once this is done, I sometimes flame and cool the loop in the target agar, although it is ok to skip this step.  Either way, I then make another zig-zag, starting in the area that I spread the bacteria in, and then moving out onto an unused third of agar.  The last streak takes up the last third, and starts in the last area I covered. 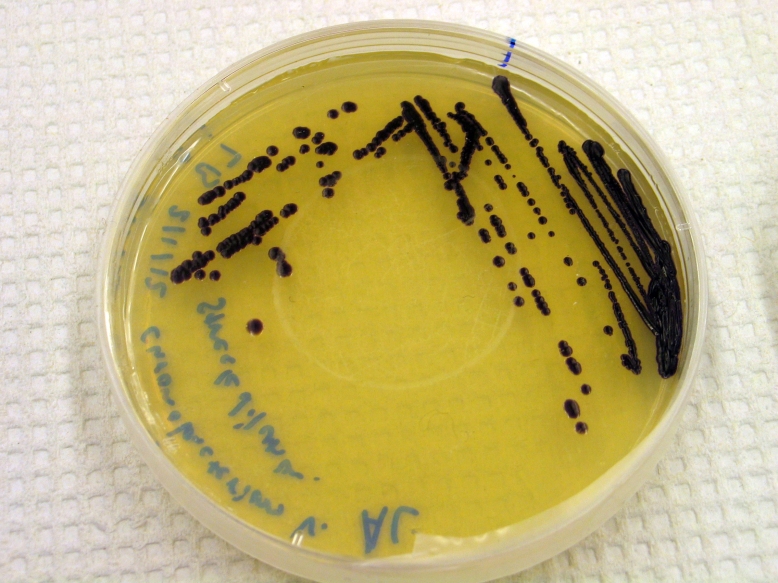 If everything works out, you should have isolated colonies like in the picture above.  A few common pitfalls are:

Clear streaking pattern, but there are too many bacteria, and it looks like I overlapped my first zig-zag with my last zig-zag! oops.