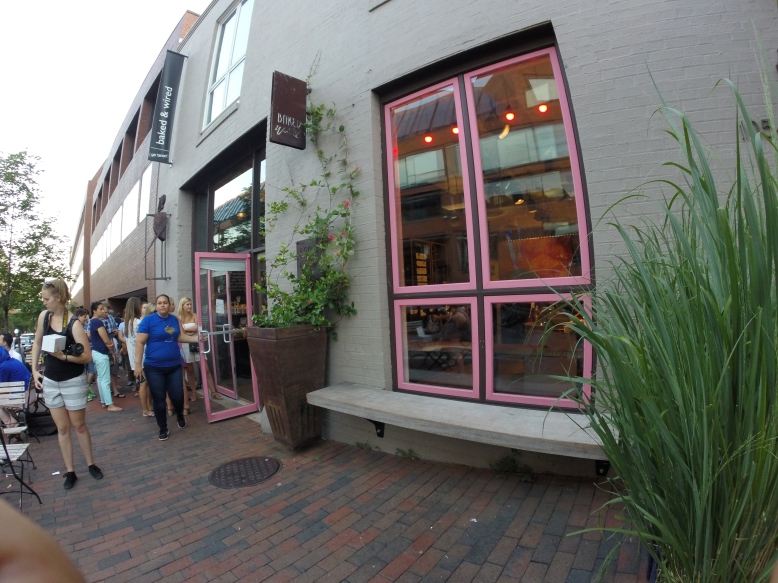 Line for days!  If you want coffee, you can probably skip it

When I arrived at Baked and Wired, after a bus and a schlep down 30th street,  I was extremely unenthused to find a line out the door.  What I did not know was that Baked and Wired is one of “those places” where people queue outside in 85 degree heat to buy expensive and trendy pastries.  There is nothing wrong with that, but typically this is not my scene.  I typically prefer a spot where I can grab a quick cup of coffee and a seat and spend a few hours lost in a book, writing emails, or pretending to be productive in some other way.

Once I was inside, I realized that it is actually that kind of place, or rather half the store is that kind of place.  There are actually two totally separate counters inside, one for coffee and one for baked goods, which form a delicious symbiosis.  From the bakery, I purchased a pistacio cupcake.  From the coffee bar, I bought a cup of coffee.

The coffee was acidic and a little fruity- a nice sharp note compared to the creamy sweetness of the cupcake.  And unlike most cupcakes, this one had little nut-nuggets in it to add a nice texture.  Together, the two of them made a lovely afternoon snack.  Alone, I think the coffee would have still been drinkable, but the cupcake certainly enhanced the experience.

Blurry, but you get the idea.  ft. finger

The decor could best be described as mixed.  The coffee bar area has no seating.  The bakery is standard contemporary-cute and displays cupcakes under glass beakers.  Down a few steps from the bakery, there is a massive shell-shaped couch that faces an american flag.

In the back, things get real weird.  Napinks are attached to napkins with baked and wired stickers in what must be a fire marshalls nightmare.  Somewhere under all the napkins, I am sure there is a wall with more napkins attached to it via stickers.  Each leaflet in the strata is marked with a thoughtful doodle or a few words.