GelIS is a backronym for Gel Integrated System.  As I mentioned before, I want to respond to the needs of the DIY bio community with the design.  The design criteria are:

Traditionally, the gel box itself has been very expensive.  I believe this is the result of the complexity of the design.  One way to quantify the complexity of a design is to look at how many pieces it has, how many materials there are, and how they are fastened together.  Below are some comparisons of boxes, looking at the “box” part alone, including combs and whatever you need to cast, and ignoring everything else.  Included are the prices new.

“BIOTANG” Gel box ($350): 7 pieces, injection molded.  This one is kinda cool because you can stack gels, and run more than one at once!  two or three materials

GelIS Box ($50):  5 peices, laser cut, 1 weld joint.  Connects to the power system via 3 laser cut pieces, which contain 8 bolted connections.  Pending thermoforming, the parts count can be reduced by two pieces of plastic, and all the bolts.

So as far as complexity goes, the GelIS box has more pieces than the BIOTANG, but less than the other boxes.  It also has a dramatically lower price tag.  This may be because it only has a single weld joint, rather than 13-20 joints.  I intend to weld that joint at the “factory” ensuring that assembly is quick and painless, and that the box is leak free.  Assembly should require no tools other than their hands, to screw a few nuts onto bolts on here and there (screwdriver recommended, but optional).

There have been several attempts to build and sell gel boxes to DIY biologists.  As far as I am concerned, they are all too expensive and too complicated.  Lets look at the two products aimed and produced by diy folks: the Iorodeo kit and the no longer available pearl biotech box.

The iorodeo box is a conventional shaped gel box with two deep buffer wells.  It costs $93  for the kit, plus about $10 (and $5 shipping) for the acrylic glue, coming to a total of 108, or you get have it shipped to you assembled for $123.  It does not come with cables, and the assembly can be tricky if you have never welded acrylic before.

The Pearl box, which I no longer see listed on their website, is also a conventional design, but if I recall correctly, it came assembled and was north of $190.  I do like their box, and I use it in the lab, but it is kind of pricey for someone who just wants to try some electrophoresis!

Neither of these kits provide a power supply, although Iorodeo sells one based on what looks to be a boost converter for $65, unassembled.  $95 will get you an assembled power supply, and for $110 you can even get the 15V power supply to the power supply, which is necessary to make it work.

Both companies sell transluminators, with the Pearl product ringing in at a whopping $299 (read: $300 + s/h) for 64 led array.  To give you an idea of how crazy that is, 64 VERY bright LEDs from digikey come out to $23, or you can go on ebay and get a couple RGB panels of the same size for $5 a pop.  The IORODEO kit is a much more reasonable $80 for the bare-bones no-power supply or assembly kit, or $95 for an assembled LED board, or $112 for assembly and power supply.  This means that if you had bought a pearl box, you would have spent about $500 and still needed a power supply, and if you go with the IORODEO box, you are going to spend $345 for a fully assembled kit, or $285 if you do all the assembly yourself (I included buying the power adapters from iorodeo, but not any assembly options).

Both of these options are pricey, and while the iorodeo kits are encouraging, I think assembly stands in the way of people really doing biology.  Not only do you spend a lot of money on the kit, but there is the daunting task of assembly before you can do what you wanted to do when you spent all that money: run a gel. 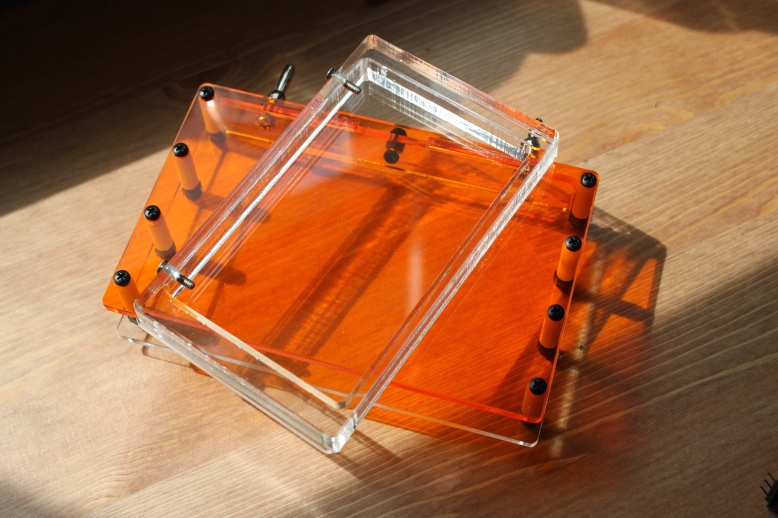 My goal is to develop a gel box, transluminator, and power supply that people can buy for $150, assembled.  You buy it, it gets shipped to you for $5 in a flat rate box, and then you open it and do some ikea assembly (put some nuts on some screws) and you are done.  Thats it.  Now you can run a gel.  Today I finished the first major piece of that system- the box.